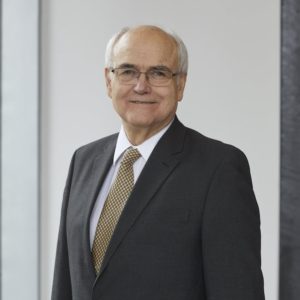 Mr. Aust has been associated with Aust Legal Inc. as Senior Counsel since 2010. In 2015, he became Senior Strategic Advisor, when he ceased practicing law.

After graduating from the Law Faculty of McGill University, he completed his articling and joined the international law firm of Stikeman Elliott in Montreal where he worked for 20 years. He was a member of the Executive Committee, Chair of the Employment Law Group.

He resigned as Senior Partner at the end of 1997 and accepted the offer to become Senior Advisor to its Senior Executive Committee of the Royal Canadian Mounted Police reporting to the Commissioner. In this position, he was involved with the realignment of national headquarters. He returned to private law practice in 2000.

During his career, Mr. Aust has represented clients before the Supreme Court of Canada, the Court of Appeal of Quebec, various trial courts and numerous administrative tribunals.

He led several independent inquiries into private and public institutions, including a major university’s administration, Health and Safety in the Canadian Grain Industry and the Competitive Position of Canadian Ports Relative to USA Ports and on three occasions headed inquiries into the methods of establishing compensation for the RCMP. He has been a guest expert and/or lecturer at national institutions and universities and in the USA, China, Russia, Japan, UK, Switzerland, Mexico, Jamaica and Tunisia.

In 2013, he was a sessional visiting professor of Organizational Analysis and Innovation in the International Tsinghua-MIT MBA program, at the School of Economics and Management in Beijing.

Mr. Aust is founding Editor-in-Chief and co-author of Executive Employment Law, a loose-leaf service published by LexisNexis since 1992 and which continues today. He is a co-author of several legal publications in English, French and Chinese. These include Le contrat d’emploi, published by Éditions Yvon Blais-Thomson Reuters in 1988 when it set sales records for legal publications. The third edition was published in 2013.